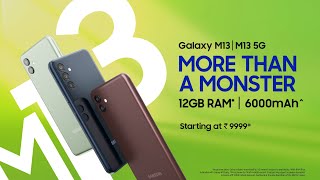 The display on the Samsung Galaxy M13 (India) is an PLS LCD screen. The pixel density is ~400 ppi, which is adequate for a device of this size. The resolution is 1080 x 2408 pixels, giving a good level of detail.

The Exynos 850 (8nm) chipset is a performance powerhouse that is fabricated on a 8nm process. It has an octa-core CPU that clocks in at up to 2.0 GHz. This chipset also supports Dual 4G VoLTE, ensuring that you’ll be able to stay connected even when traveling.

samsung is a well-known brand with a good reputation in the smartphone industry. The company has just released its latest device, the Samsung Galaxy M13 (India). This phone comes with some impressive features, including a battery capacity of 6000 mAh. The phone also has a quick charging feature, so you can get up to 50% battery life in just 30 minutes. Additionally, the phone supports Fast USB Type-C charging.

Dual SIM slots are quite common in budget and mid-range smartphones, but they are starting to become popular in high-end devices too. The Samsung Galaxy M13 (India) comes with dual SIM slots that can accommodate Nano SIM cards. It also has support for 4G, 3G, and 2G networks. VoLTE is supported, so you can make calls over LTE networks. Wi-Fi is included, and it supports the 802.11 standards. Bluetooth is also on board, and it’s version 5.1. GPS is included with A-GPS support.

The Samsung M13 (India) space is one of the best-designed phones on the market. samsung smartphone manufacturer has released its latest smartphone called the Galaxy M13 (India). The phone comes in three colors: electric blue, phantom black, and rose gold. The design of the phone is colorful and sleek. It is also compatible with the hand, making it easy to hold. The fingerprint sensor and front camera position are good. However, the key issue with this phone is its camera position.

The Samsung M13 comes with a fingerprint sensor that is positioned on the side. It also has other sensors including a light sensor, proximity sensor, and accelerometer. This makes the phone more secure and provides additional features. The fingerprint sensor can be used to unlock the phone, as well as for authentication when making purchases or logging into apps. It can also be used to access Private Space, which is a secure area of the phone that can be used to store sensitive information.