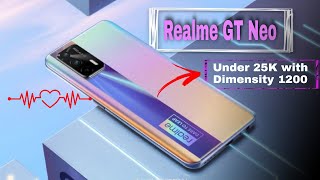 The latest version of Android, Android 11, Realme UI 2.0 is installed in the Realme GT Neo Price in Bangladesh. there’s even a chipset installed in the phone which is MediaTek MT6893 Dimensity 1200 5G (6 nm). the GT Neo incorporates two variants. The first variant features a 128GB built-in storage space, along with 8 GB RAM. Meanwhile, the other variant is equipped with 256GB of internal storage space, along with 12 GB RAM also

The Realme GT Neo comes with a Super AMOLED which has capacitive touch. The screen’s size is 6.43-inches featuring an 85.9% screen to body ratio. the smartphone itself is capable of providing resolution 1080 x 2400 pixels which are considered as high definition (HD).

The company placed a Li-po 4500 mAh battery inside the phone. They also offer a standard 50 W charging speed.